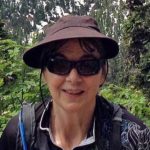 Wendy’s professional experience is marketing software and web services, which has given her opportunities for much international travel, mainly to Europe and East Asia. She has lived in Japan four times — twice was in rural areas, first studying pottery and next teaching English. The third and fourth times were in Tokyo, studying Japanese and setting up the local office for a Seattle-area software company.

She supports One World Now! because she believes that students who are willing to study foreign languages and go overseas should have the opportunity to do so, and because it’s important that US citizens find out about the rest of the world, preferably at an early age, as the rest of the world learns about us.

Wendy enjoys many sports and is active on issues of climate and electoral reform.