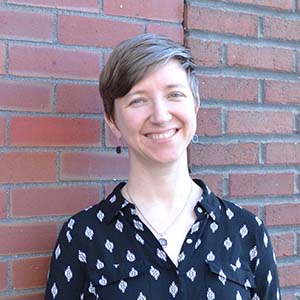 Sarah Standish grew up in Portland, Oregon and earned a B.A. in Asian and Middle Eastern Studies from Barnard College. After graduating from college, she received a fellowship from the Center for Arabic Study Abroad to study advanced Arabic in Damascus, Syria from 2009-10. She was the founding Arabic teacher of the first Arabic program at a public school in Oregon at Lincoln High School, where she taught from 2010-2014.

She joined OneWorld Now! in fall 2014 as OWN’s Academic Program Manager, and also taught Arabic with OWN for several years before becoming Deputy Director. She is the author of Cultural Smart! Syria (Kuperard, 2010) and the lead author on the forthcoming textbook Jusuur: Beginning Communicative Arabic (Georgetown University Press, 2020).

She is proud to be part of a great team of staff at teachers at OWN. She speaks Modern Standard Arabic and Syrian Arabic and enjoys reading, cooking, and biking in her free time.