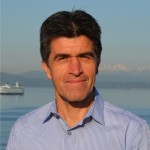 Herman Uscategui is the Senior Vice President Strategic Partnerships and Business Development at Cortex, a company that specializes in A.I. / Machine Learning and Big Data optimizing marketing channels using visual data sources. Prior to current roles, Herman held various executive positions at Starbucks Coffee Company, including director of Global Strategy – Strategic Alliances where he was responsible for future casting, global alliances, special projects, new markets development, including partner selection process, negotiations, and coordination/development of strategic alliances. Prior to joining Starbucks, Herman was director, Worldwide Projects at Westin Hotels & Resorts corporate offices in Seattle, WA. He was responsible for international hospitality management development and franchise agreements. Additional responsibilities at Westin included representing then Westin’s parent company, Aoki Corporation of Japan in international business ventures. He started his business career in Tokyo, Japan with Aoki Corporation. Herman has been involved in international projects across four continents and has lived in Asia, Europe, Latin America and the US.

He received a Master in Engineering from Saitama University/University of Tokyo and is a PhD scholar from the University of Tokyo in Japan. He also holds a Master in Science of Economics from Temple University in Japan and is fluent in several languages. Herman is the chair of the board of OneWorld Now! He is also frequent guest speaker and lecturer at various universities and community colleges. Herman belongs also to the International Advisory Board of ESADE in Barcelona, Spain. Herman is an avid cyclist and outdoors enthusiast and enjoys mentoring young people on education and career development.